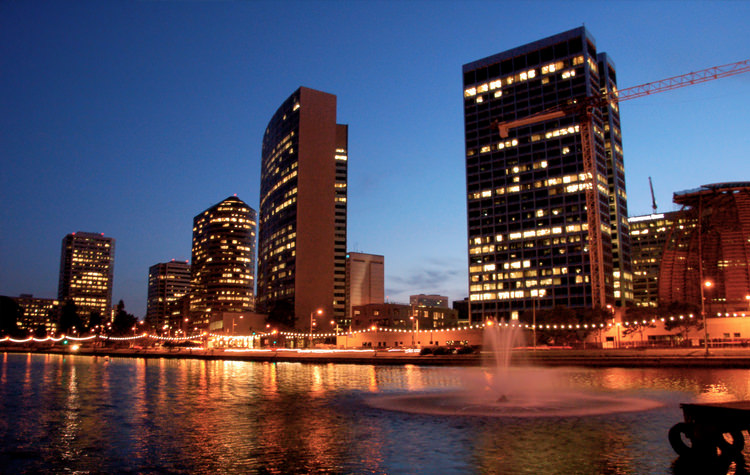 While Twitter reconstructs 19th century log cabins at its new headquarters, talk around Oakland tech has been focused on more practical developments.

Last week, the San Francisco Business Times reported that real-estate investment firm Divco West has plans to buy Lake Merritt Plaza across the street from Snow Park. The 27-story, Bill Valentine designed building boasts 490,000 square feet of office space and views of Lake Merritt and the San Francisco Bay. When the building last sold in 2006, it went for $160 million—Oakland’s largest per-square-foot deal at the time.

While the details of the latest deal were left undisclosed, it adds to speculation that Oakland is on its way to becoming a new tech hub as San Francisco reaches capacity and cheaper rents become more attractive.

Tom Krazit, executive editor at GigaOM, says Oakland is in prime position to scoop up companies looking to save a dime and stay close to their urban-minded employees.

“Oakland should think more grandly: major tech companies that are thinking about the future of the Bay Area should consider making Oakland their home,” Krazit said. “Google and Apple probably aren’t going anywhere, but younger public companies near Silicon Valley with shallow roots like LinkedIn or soon-to-be-giant companies like Box or Evernote could be prime candidates for setting a new trend in how the tech industry is distributed across the Bay Area.”

The key for Krazit is taxes, and it’s one place San Francisco went wrong. Cheaper rents are already better for a company’s bottom line. The revenue generated by relocating tech companies in Oakland shouldn’t be given away by corporate tax breaks.

Yet some are still weary of tech’s encroachment on Oakland no matter how inevitable it may seem. James Robinson, himself an Oakland resident and writer for PandoDaily, wrote a response to Krazit stating that Oakland was too dangerous, too hard to get to from San Francisco and what tech companies really need is new hub that is safe and practical, not just cheap and close.

“Plainly put,” Robinson said, “it’s hard to encourage large scale relocation of a workforce to a place where you’ll go out of your way not to have to walk a mile after dark.”

While Robinson’s concerns may be a bit narrow-minded, the fact remains that tech is on its way and may already be here. Last month, Oakland’s Blue Bottle Coffee reported a $25.7 million investment by a slew of tech executives and lead by the same investment manager behind Facebook and Twitter. For Robinson and the like, the real concern shouldn’t be logistics or coffee, but our rents.

Read the rest at LiveWorkOakland.