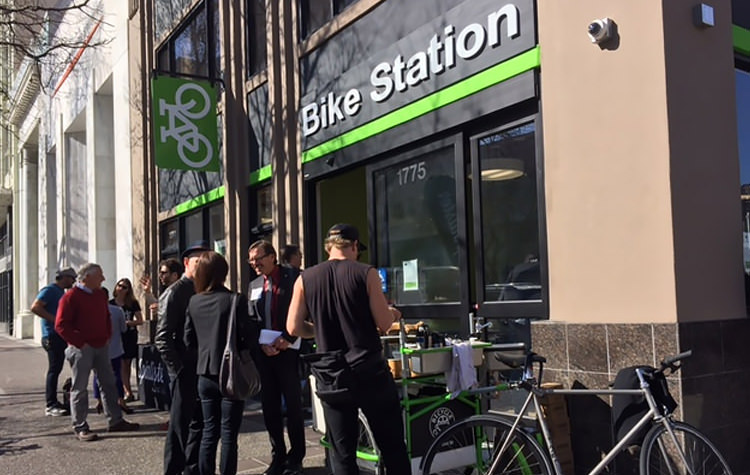 Cyclists of all stripes are celebrating the grand opening of the new Bike Station in uptown Oakland, a one-stop shop that not only provides free, secure bike parking but also a range of services from wheel truing to u-lock sales.

Using the station couldn’t be more easy and accessible—pedal to the front door and a bike station employee will greet you, take your bike and secure it free of charge between the hours of 7:00 am and 9:00 pm. Overnight storage is also available for $5 per night, if desired. Uptown Oakland Bike Station Exterior Photograph

A number of municipal and transportation leaders joined a throng of excited cycling enthusiasts Wednesday morning to officially open the station to public service.

Located on the corner of 19th and Broadway in uptown Oakland, the Bike Station is the culmination of a partnership between BART, the City of Oakland, Bike East Bay and the Metropolitan Transportation Commission.

“Bicycles are a critical component of the Bay Area’s transportation equation,” said BART Director Robert Raburn. “At BART, we’re committed to cyclists, and this new Bike Station will help meet the needs of our community as we move forward.”

A great deal of research and discussion went into the planning of the Bike Station to ensure it was growing and encouraging the bike market as a whole, rather than directly competing with local bike shops.

While the Bike Station offers a variety of basic biking accessories for sale such as helmets and lights and offers in-station tune-ups and maintenance, bike sales still remain the business of bike stores.