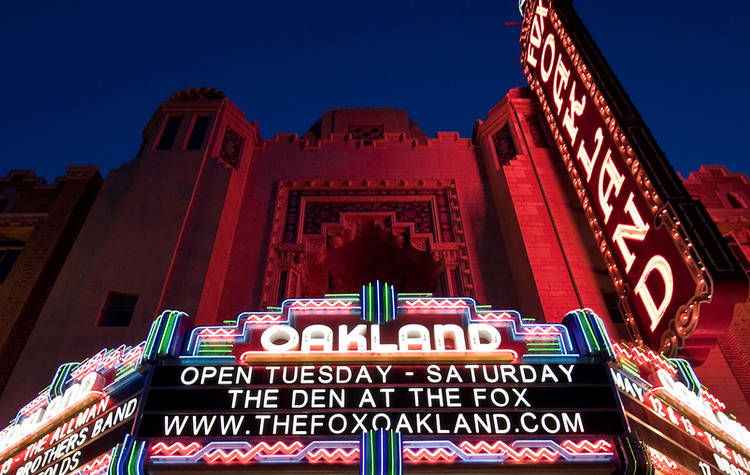 Idling the afternoon away in the waterfront Brotzeit Biergarten, it’s easy to see why Oakland keeps cropping up on “America’s coolest cities” lists. Moustachioed locals sup Teutonic ales, while posters proclaim the recent Rocktoberfest, which showcased Oakland’s punk-polka scene (highlights: Bayern Maiden, possibly the world’s only oompah Iron Maiden tribute band) and the surrounding industrial-scape provides a requisite frisson of edginess. Plus, it’s impossible not to admire any watering hole where boats can moor right outside and order a pint.

“There is no ‘there’ there,” quipped Oakland’s most famous literary daughter, Gertrude Stein, about her home town in 1933. And for decades, there really wasn’t anything of note in this shabby port city, squatting ungainly opposite its glamorous sibling across the Bay. While San Francisco had glitter, Oakland had grit. San Francisco enjoyed the Gold Rush, Summer of Love and digital revolution. Oakland? Gang violence, a crack cocaine problem and a homicide rate that would make Jimmy McNulty flee in terror. They might be only a five-minute subway ride away, but until recently the Golden Gate city and Oakland were worlds apart.

However, Oakland is now shaping up to be California’s answer to Brooklyn, with affordable rents luring bohemian émigrés from across the Bay. (Oakland claims to have more artists per capita than any US city, aside from New York.) Moreover, there’s a sense that the counter-cultural vibe intrinsic to San Francisco’s DNA – Ginsberg poetry jams, Haight-Ashbury hippie love-ins and gay liberation – is resurfacing in Oakland, having been subdued by geeks flooding into the city to work for tech companies such as Twitter.

I’d arrived by ferry from San Francisco at the marina of Jack London Square, where the Eat Real food festival was in full swing. Visitors buzzed between food trucks such as Juhu Beach Club (Indian street food) and Señor Sisig (Mexican-Filipino fusion) then decamped, tacos in hand, to Heinold’s First and Last Chance Saloon. At Jack London’s former local, today’s regulars struggled to keep pints from sliding down the bar, thanks to the tilt caused by the 1906 earthquake.

When Oaklanders aren’t rhapsodising about their weather (they call it “Sunny Side of the Bay” thanks to 260 sunny days a year while San Francisco regularly shivers in a fog bank), they’re gushing about their food. Widely acknowledged as California’s most exciting culinary scene, it’s spearheaded by a battalion of style-mag-friendly, tattooed chefs such as Juhu Beach Club’s Preeti Mistry and Brown Sugar Kitchen’s Tanya Holland.

At 11am on a Sunday morning, I drove through West Oakland, a desolate stretch of the city yet to get the gentrification lick of paint. Block after block of empty warehouses followed block after block of barren pavements, until suddenly a line of 30 to 40 people clutching coffee mugs and mimosas came into view. They were queuing outside Brown Sugar Kitchen, where Holland serves her signature buttermilk-fried chicken and cornmeal waffle with cider syrup from behind a diner-style counter. Holland chose down-at-heel West Oakland for her lauded venture because, as she explains, “location equals concept”.

I found the same ethos behind Uptown’s Duende, a restaurant unimaginable in San Francisco’s touristy, cable-car-lined streets. Bodega by day, pintxos restaurant and avant-garde music venue by night, Duende serves food as refined and experimental as anything found in San Sebastian. Take wild nettle-studded fideuà (a paella-like dish with noodles instead of rice) or squid with txakoli mayonnaise, for starters. Executive chef Paul Canales is a former doyen of California’s punk scene; he explained that menu fonts are inspired by LA punk band X and demands that his staff read the Spanish poet Lorca.

Indeed, Oakland is a microcosm of punk values. Nearby is the Clash-monikered Rudy’s Can’t Fail Café, co-owned by Green Day bassist Mike Dirnt. The diner has mohawk-wearing waiters, boozy milkshakes and a table featuring Dirnt’s old scissor collection. Green Day have remained faithful to their native city – they still live here and are frequently seen browsing Oakland farmers’ markets with their families. Beyond punk rock, Oakland also spawned Sly and the Family Stone, the Pointer Sisters, En Vogue and Tupac Shakur. Today, its live music scene dazzles with venues such as jazz club Yoshi’s or the Art Deco Fox Theater. Ten years ago, this historic concert hall was a homeless hostel. Now it hosts the likes of the Arctic Monkeys.

Pantalooned rapper MC Hammer also hails from Oakland, and was recently recruited by the tourist board to promote the city. I took one of his recommendations and followed the 3.5-mile path around Lake Merritt, a saltwater lagoon that pools slap bang in the middle of Oakland as Canada geese flapped around and vendors rented out Venetian gondolas. There was the odd whiff of marijuana too. Oaksterdam, a district where medicinal cannabis is available, is a few blocks away. The district even houses Oaksterdam University, a legitimate “cannabis business school”.

Absent from MC Hammer’s list was Auto Row, a strip of derelict car-repair shops transmogrified into art galleries and boutiques. At sewing co-op the 25th Street Collective, women make and sell sustainable “slow fashion”, such as leather jackets made from old Cadillac seats. Their warehouse also houses an urban winery where you can sample local syrahs.

That evening, I took a taxi to the abandoned 16th Street Station, where 2,500 youths mooched around the dusty parking lot for the denouement of multimedia artist Doug Aitken’s Station to Station experiment – a three-week Pop Art train ride across the US (think Glastonbury on wheels) which started, fittingly, in Brooklyn. As British all-female post-punk band Savages performed, all manner of arty weirdness was going on. Artist Evan Holm played ambient jams from underwater record players, multicoloured smoke bombs were let off while artisans held court in yurts dotted around the grounds. It felt like a Berlin rave circa 1991.

In 1967’s hippie anthem “San Francisco (Be Sure to Wear Some Flowers in Your Hair)”, crooner Scott McKenzie urged listeners to visit the place with “gentle people” to witness “a whole generation with a new explanation”. Almost half a century later, the lyrics still resonate, but only when substituting “San Francisco” for its scrappy brother across the Bay. Ignore Gertrude Stein’s home town trashing – there really is something “there” in Oakland after all.